From The Truth of It:

Developed as a collaboration between the Canadian Partnership Against Cancer and the Health Design Lab, part of the Li Ka Shing Knowledge Institute at St. Michael's Hospital in Toronto, The Truth of It features interviews with Canadians diagnosed with cancer who were asked to share their story so others could learn from their experience. By providing candid accounts of the personal impact of cancer, the video series will serve as an educational resource for health care professionals as well as patients, survivors and others with a personal connection to cancer.

The men and women featured in the videos range in age from 20 to 73 and are affected by different types of cancer, including breast, colorectal, lung, testicular and ovarian. Videos are available in both English and French and are accompanied by complete transcripts. Currently, the series has 42 videos, including interviews with six patients from First Nations communities and two interviews with patients from Inuit communities.

"I took the time to just mentally accept the disease and tell myself that I'm strong and I can fight it, even though whatever happens, happened with my mother or the family history, I am not going to let that interfere with me fighting this disease and staying positive."

Anju works full-time and teaches Indian cooking classes on the side. She is married with two sons.

Anju was diagnosed with peritoneal cancer at the age of 43.

I found that with myself one of the challenges with moving forward and recovering has been accepting, of course, that it could always be a part of my life. And if it is, what then would be normal for me? What then would be a normal life?

Doug was in his early 20s when he was told he had brain cancer. Ashleigh, now his wife, also shared her story of facing cancer and caring for Doug.

"This may sound weird but I think this entire experience of having breast cancer has been less awful than I anticipated and, what I mean by that is, it's awful and I would never wish this on anybody. But somebody who had cancer a few years ago said to me you'd never wish cancer on anyone but there are things that you can experience when you have cancer that you can't experience any other way.""

Gill is a writer and television personality. She is married with three young boys.

She was diagnosed with breast cancer at the age of 42.

"It is not always easy, it is ok to be upset about what's going on. It really does just plain suck sometimes to be going through this."

Janet was an artist and a mother of two young boys. She was diagnosed with breast cancer at the age of 40.

Janet passed away in November 2011. 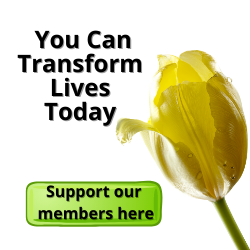 When you donate to HopeSpring, you are making an investment in the quality of life in our community.  You’re directly helping to address a serious challenge, by providing the resources needed to lessen the burden of cancer.

Pinning this post will make it stay at the top of its channel and widgets.

This pin will expire , on